After some problems with corrupted configuration files we have decided to update the workbook component, starting with object generation 5.28. We hope that all workbook function work as before. If you find issues please be patient and report to us what you found. We will then try to help you as quick as we can.

We have updated the list of special computations. You can now do variations of 2 parameters rather easily, using objects of type ‘2 parameter variation’.

As an example we use a low-emission glass coating with several layers:

To do the required computations we generate an object of type ‘2 parameter variation’ in the list of special computations:

Editing the new object brings up this dialog: 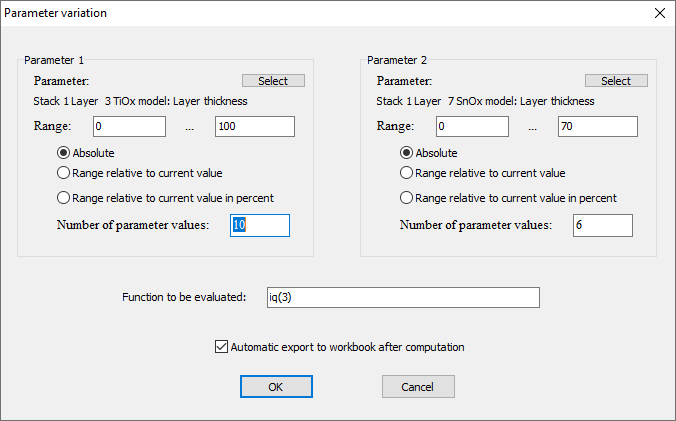 For each parameter you can select which one it is and how the range of values is chosen. The editor ‘Function to be evaluated’ allows to enter the quantity you want to compute for each pair of parameter values – in our case this is iq(3) (the light transmittance). If you check the option ‘Automatic export to workbook after computation’ the obtained data are written to the workbook.

Once this dialog is closed another one opens which is used to set graphics parameters for the graph of the data. This graph can be shown in a view if you drag the special computation object to a list of view items. The first parameter (TiOx in our case) will be displayed on the parameter axis, the second parameter values (SnOx thickness) will be displayed along the x-axis: 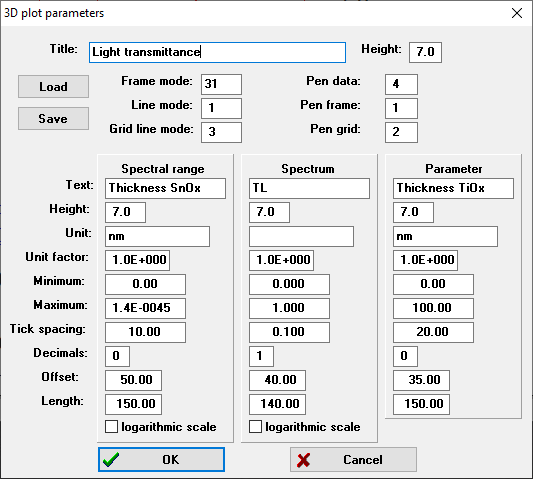 Please note: Computations may require some time for this type of object. Automatic updates are switched off which means you have to actively trigger the computation. You can do that in the list of special computations by selecting the object and then click the ‘Update’ menu item. If you display the object in a view re-computation is triggered by a click on the view object. Be careful to click only when you really want to start a new computation! 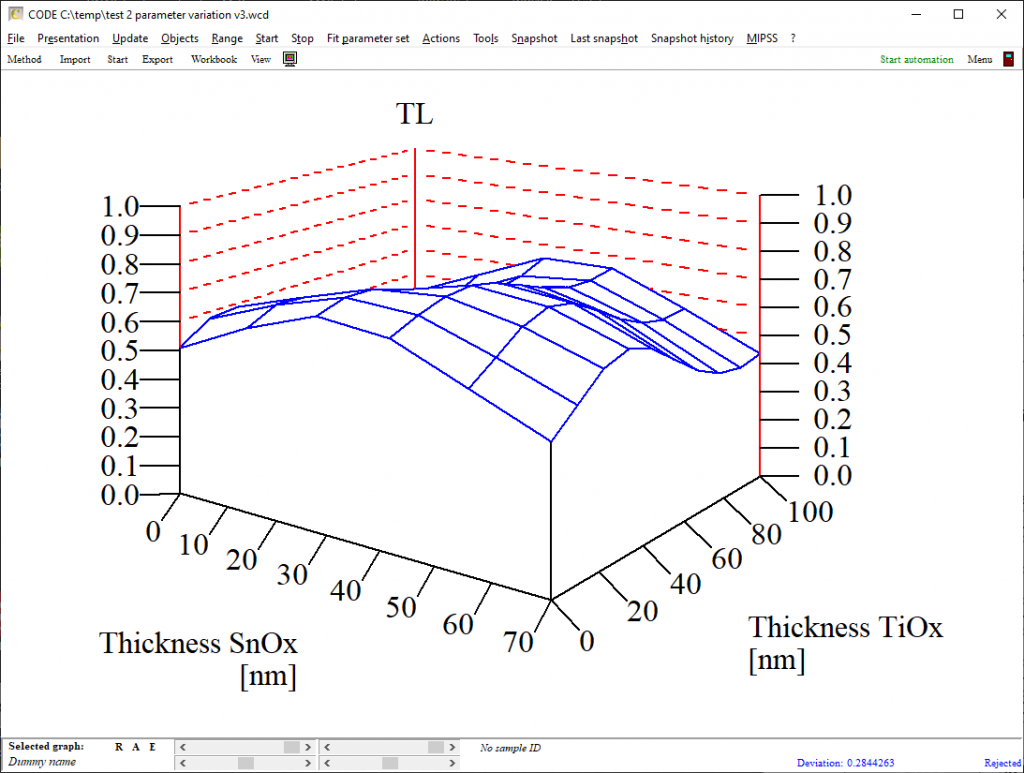 You can also select to generate false color plots which you can use to display a kind of contour graph: 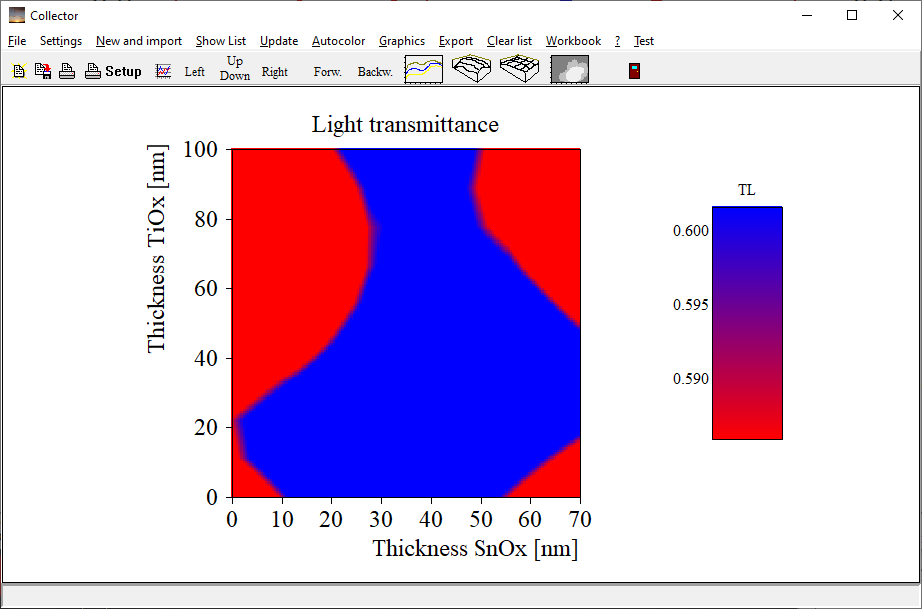 As mentioned above you have the option to store the computed data to the workbook. If your object is called ‘LT chart’ a workbook page with this name is created and the data are written to the worksheet, including minimum and maximum value as well as the position of these extrema: 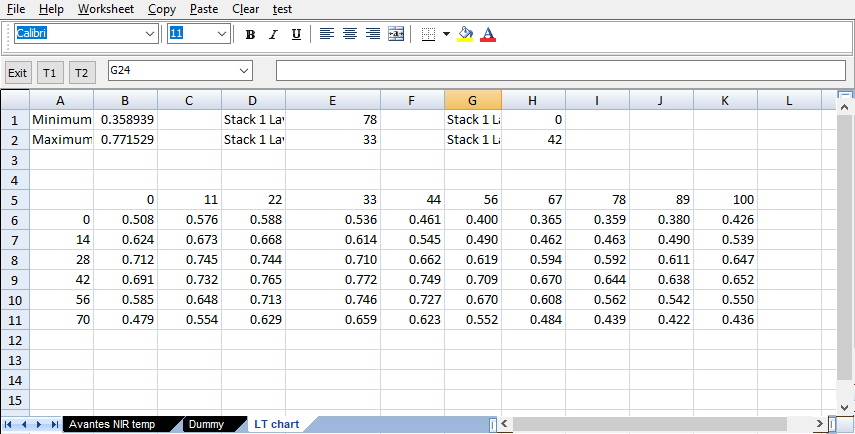 Besides optical spectra CODE computes sheet resistance values of layers stacks. A sheet resistance object in the list of integral quantities computes the current value and – with the ‘Optimize’ option turned on – the squared difference to a given target value.

If you type in a measured sheet resistance value as target value CODE optimizes a layer stack to reproduce measured electrical performance (only if the option ‘Optimize’ is switched on, of course). If you check the option ‘Combine fit deviation of integral quantities and spectra’ (File/Options/Fit) you can fit spectra and sheet resistance at the same time, balancing importance by setting proper weights for each quantity.

We have now added the ability to take into account measured sheet resistance values to batch fitting. In order to use this new feature you have to define a sheet resistance object in the list of integral quantities and name it ‘sheet resistance fit’. Set its ‘Optimize’ option ‘On’. Then generate a new batch fit based on the current model – or use an existing one. Here is an example of the results page: 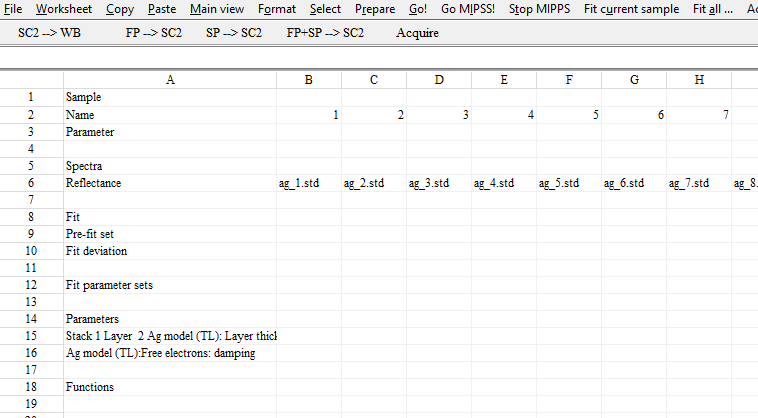 Note the empty line between the last spectrum (‘Reflectance’ in this case) and the line called ‘Fit’. Enter the key phrase ‘sheet resistance fit’ into the first column and type in or copy the measured values for each sample (i.e. for each column). The table should look like this now: 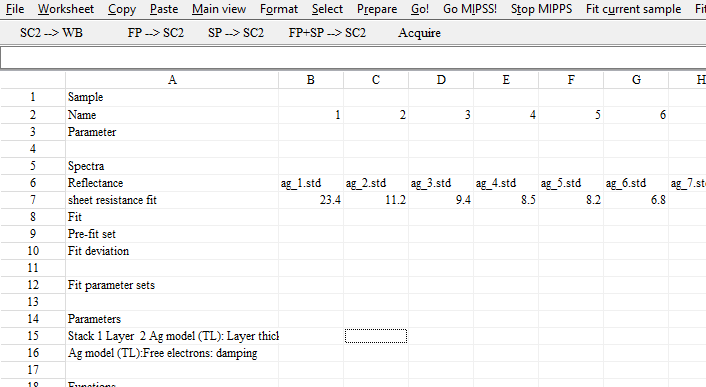 That’s all – you are now ready to start batch fitting. For each sample the measured values will be entered as target values and CODE will optimize both spectra and sheet resistance values.

You might encounter the difficulty that measured and simulated sheet resistance values do not easily agree. In this case you should check if your sample might show a depth gradient of the conductivity. A reason could be a depth dependent density of defects like grain boundaries within the layer. In such a case you should consider dividing the conductive layer into several parts with different damping constants of the charge carriers. You can read a discussion for silver and other conductive layers here.

Object generation 5.30 comes with some more script functions supporting error handling. We have generated a simple demo application in CODE which looks like this: 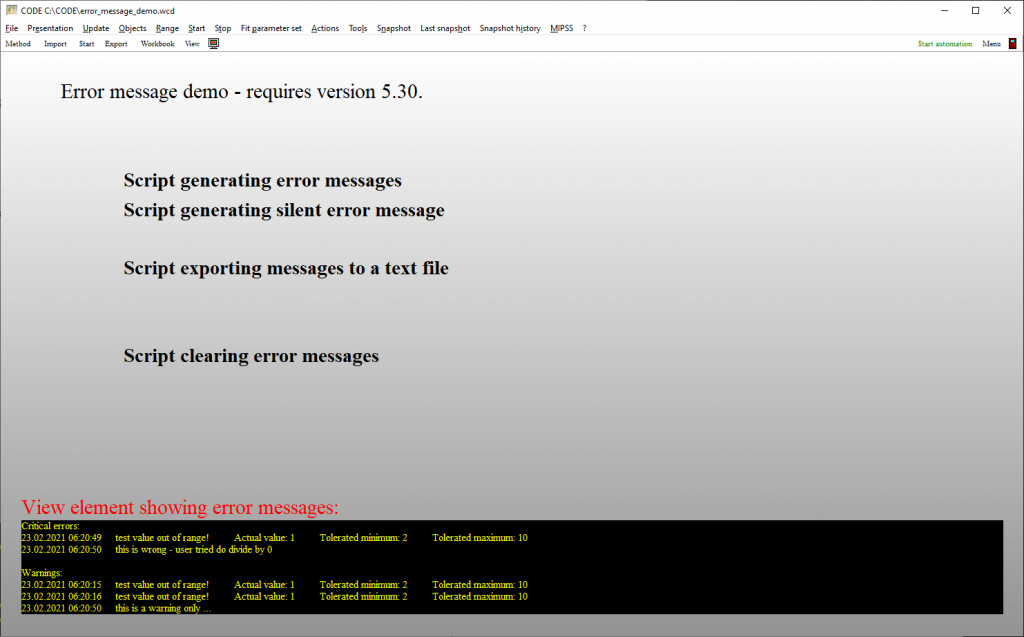 While some measurement routines (list of spectrometers) and other procedures produce error messages by themselves you can generate error message by a script command:

Here the first integer parameter indicates the type of error, the second one the classification. ‘1’ means ‘critical error’, ‘2’ stands for warning.

Error messages get a timestamp and are collected in an array until the script command ‘clear error messages’ is executed.

If you use CODE to acquire spectra with a spectrometer object you can generate measurement reports which collect all measured spectra for a sample – these are JSON files. Should there be warnings issued by the measurement scripts the corresponding error messages are stored in the ‘error section’ of the JSON files as well.

Answering some recent questions about optical modelling, I dug out some old slides. They explain some model improvements that were implemented a long time ago. Combined with today’s fast computer hardware they provide the basis of high quality modelling.

Optical constant models describe the response of matter to the electric fields of a light wave. The main mechanisms are

Electronic transitions can be roughly described by simple harmonic oscillators. However, these are not very realistic and should be used far away from the resonance frequency of the oscillator only. For band transitions of crystalline materials the Tauc-Lorentz model is appropriate: 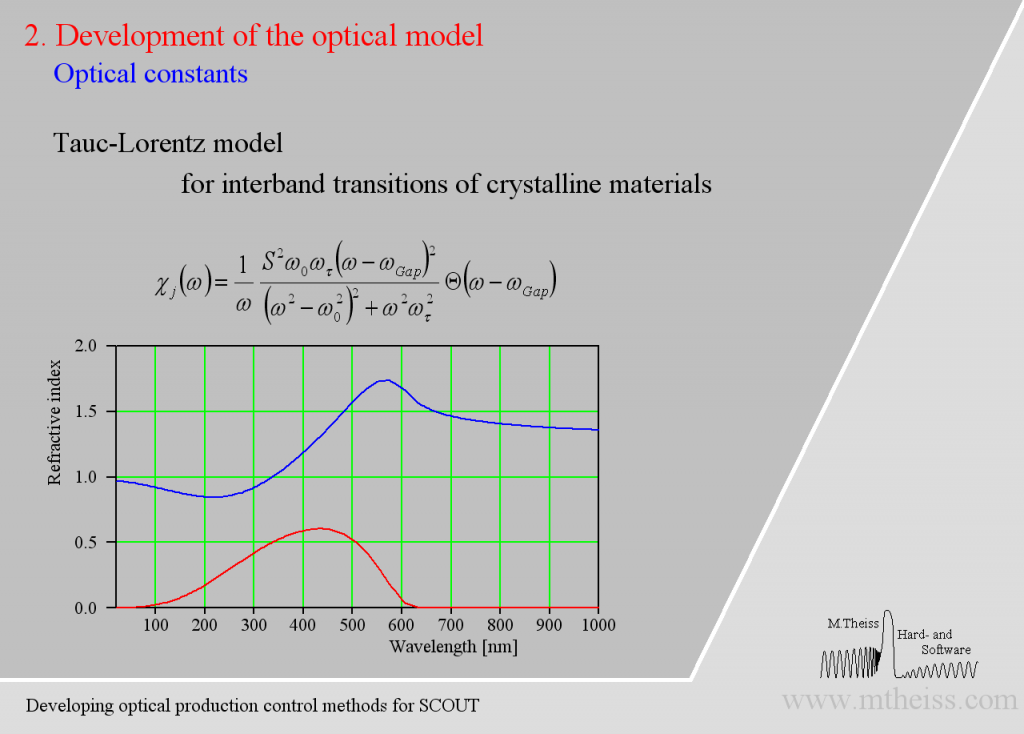 Be prepared to superimpose several of these terms since crystalline materials may have feature many interband transitions, like AlGaAs: 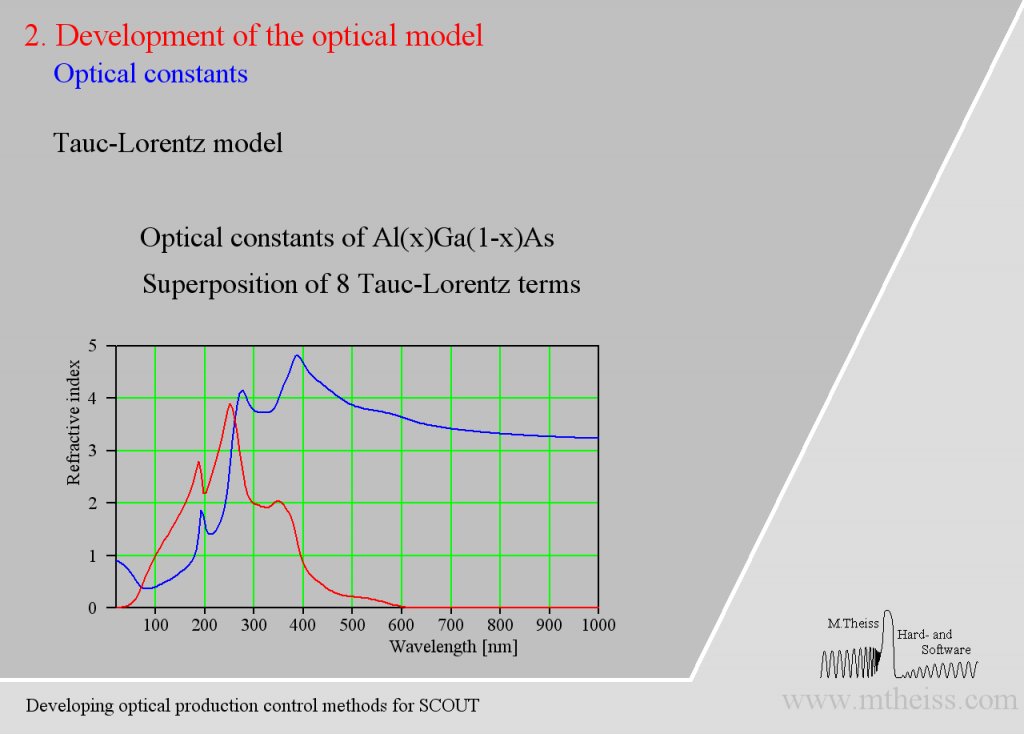 Amorphous semiconductors and almost all oxides and nitrides used in thin film applications can be described by the so-called OJL model. It is based on some very simple assumptions about the interband  transition and states within the band gap which are caused by disorder:

For many materials the OJL model produces the correct shape of n and k with a few parameters only:

This makes fitting optical constants rather easy. In addition, the band gap parameter as well as the tail state exponent (also called ‘disorder parameter’) have physical meaning and characterize the state of the material.

Although harmonic oscillators should be the right tool to describe vibrating parts of molecules or crystal lattices they are simplifying too much. Here is an attempt to describe 2 strong and a weak side band of molecules on a metal surface: 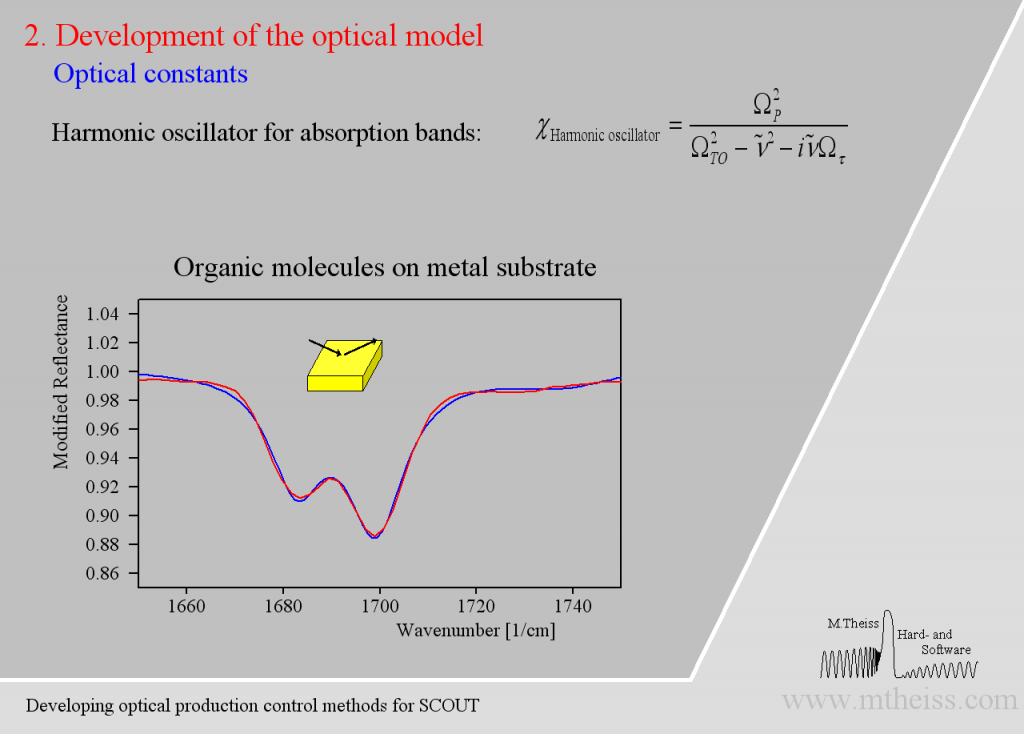 The model is ok but the overall shape of the absorption bands is not reproduced very well. The reason is that the harmonic oscillator has a constant damping parameter, i.e. the vibration is slowed down in the same way in the center (where the absorption is strong) as in the regions of small absorption. As the amplitude of whatever vibration we might have is certainly stronger in the resonance region the interaction with the outside world is certainly stronger. So whatever causes the damping will be stronger close to the resonance frequency and weaker far away from it – at least this is very likely. The so-called ‘Kim oscillator’ model uses a Gaussian decay of the damping with distance from the center of the oscillator and it fits many absorption bands very nicely, much better than the harmonic oscillator: 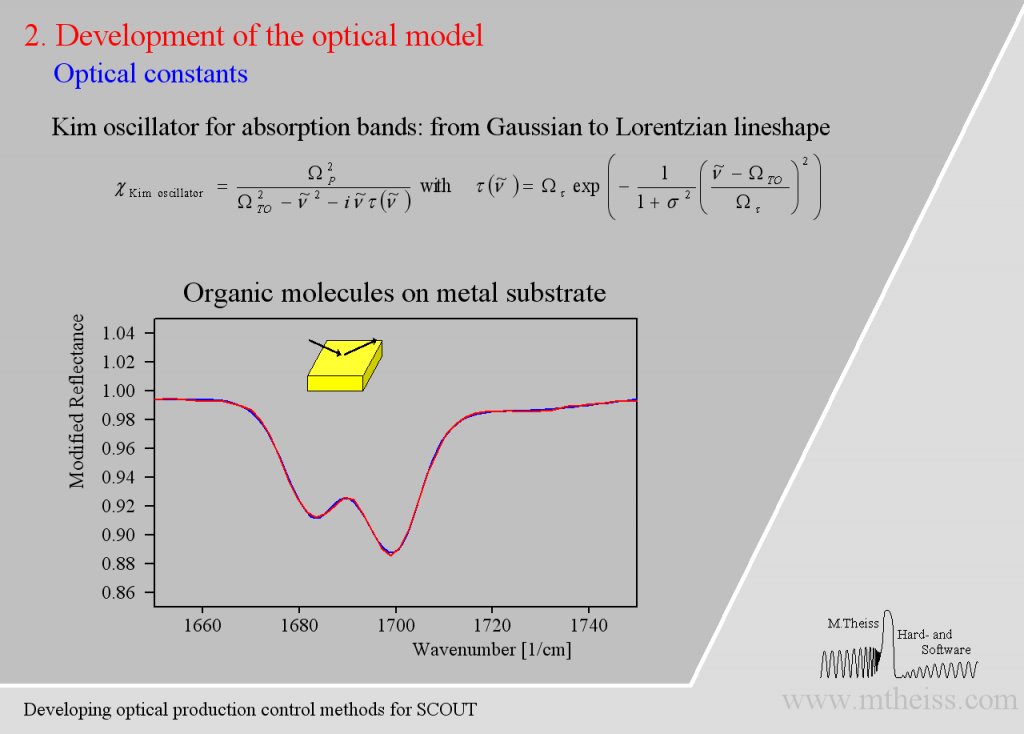 Besides describing vibrational modes the Kim oscillator can also model high energy interband transitions above the OJL model and the broad band absorption of confined charge carriers (which are almost free but are blocked to leave a microcrystal).

The absorption of light by the acceleration of free charges in a metal or doped semiconductor can be described by the classical Drude model. It has 2 parameters only – the plasma frequency is directly related to the concentration of charge carriers whereas the damping constant is connected to the mobility (or the inverse mean free path).

The only class of materials for which we need more than the Drude model is that of highly doped semiconductors, i.e. those materials which are used for transparent but conductive layers (TCOs). The following example shows the difference – the transmission spectrum of a ITO layer is not adequately reproduced by the (in this case too simple) Drude model:

Again, like in the harmonic oscillator case, we need to introduce frequency dependent damping. As it turns out we need to have a smooth transition between 2 levels of damping – high in the mid infrared, and low in the near infrared: 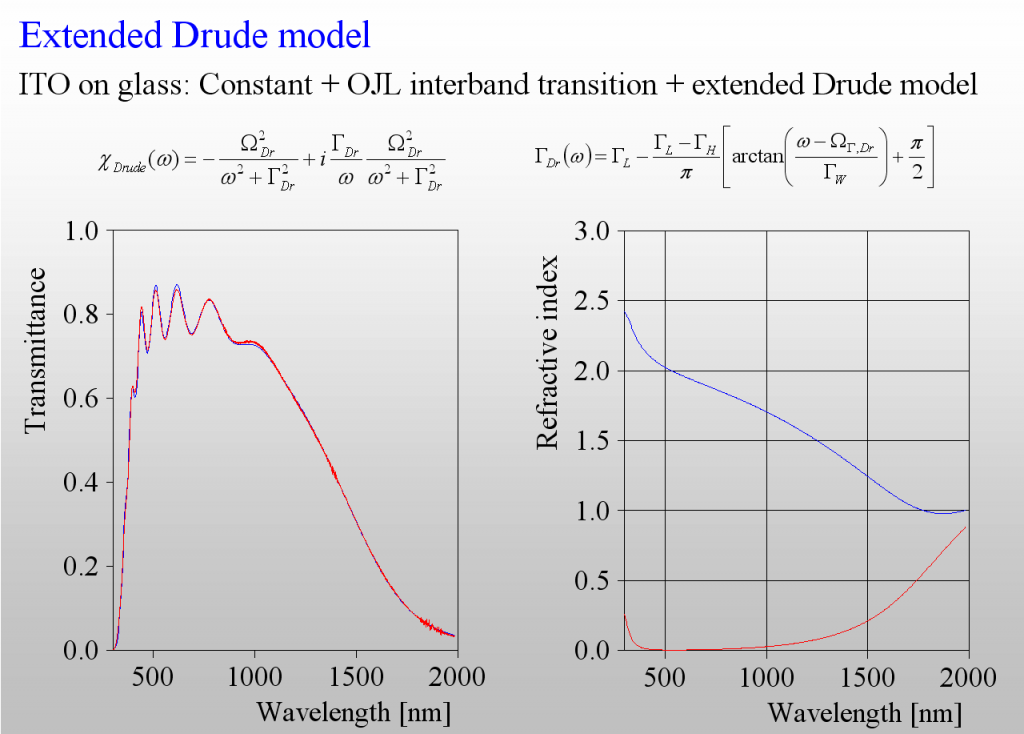 The 3 extra parameters of this model describe the difference of the damping constants, the width as well as the spectral position of the transition zone.

For many applications TCOs need to be rather thick (a few hundred nm). Be prepared to face inhomogeneity in depth of such layers. In this case you need to use 2 or more sublayers which differ in the concentration of charge carriers. 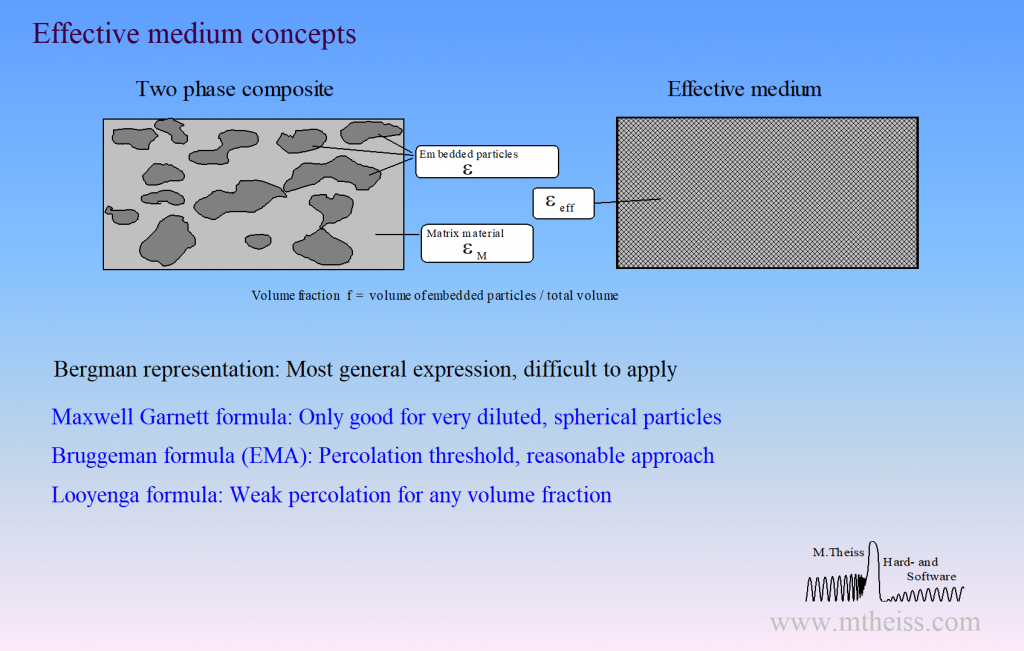 Unfortunately, there is not a unique way of mixing optical constants. Our software packages have the following implementations for effective material properties:

For some composites it does not really matter which approach you take. Here is the reflectance of a SiO2-air mixture, computed using the simple expressions given above: 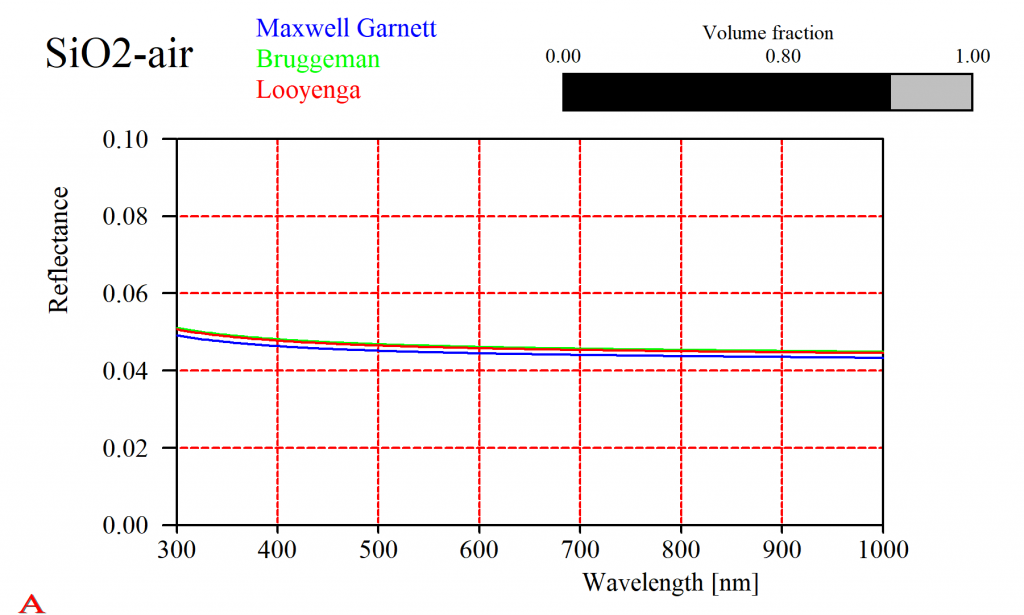 That should not lead to the wrong conclusion that this is always the case. Especially metals show a large variety of mixed properties. For a silver-air mixture the simple solutions give very different results (in fact, all of them will be quite wrong and you have to use the difficult Bergman approach): 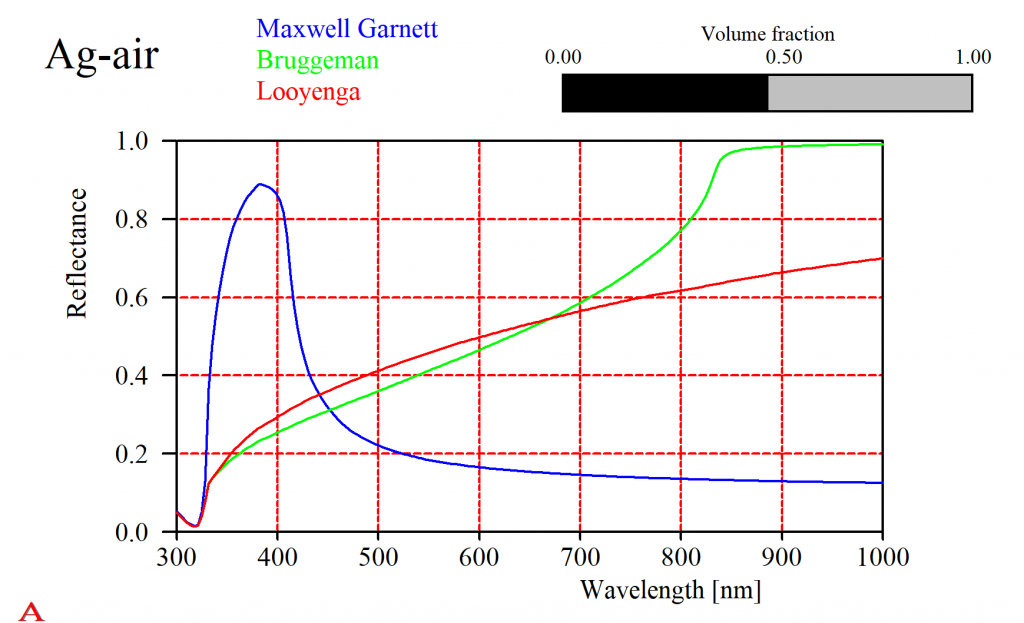 Which model should I use?

Finally, here are some recommendations which model to choose: 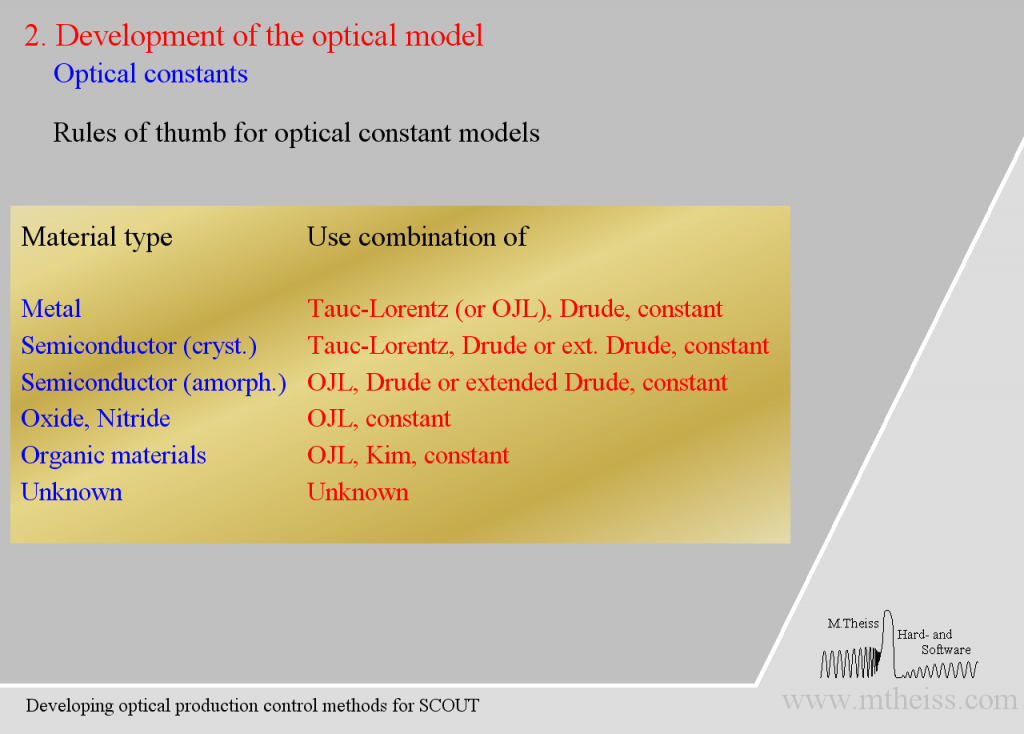 For some time objects of type ‘parameter variation’ (members of the list ‘special computations’) did not compute their data correctly. We realized that today and fixed the problen im object generation 5.30.

Starting with object generation 5.12, you can store fit parameter sets in a list called ‘Fit parameter pool’.  This list is stored as part of the SCOUT or CODE configuration file. Using fit parameter sets from the pool avoids the necessity to load them from separate files.

Using file based fit parameter sets is possible after all, of course.